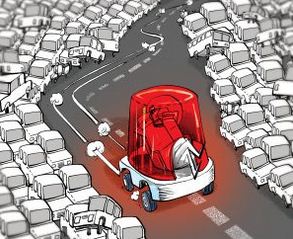 Last week, the Madras high court ordered the National Highways Authority of India to separate ordinary citizens from VIPs at toll gates, with a dedicated lane for the latter. Of course, high court judges are included in the list of VIPs. The court held it to be ‘disheartening’ and ‘very unfortunate’ that judges are ‘compelled to wait in the toll plaza for 10 to 15 minutes’.

NHAI decided to challenge the directive. One might have expected the judges to be rather more concerned that more than a million cases have been pending in 24 high courts across India for over a decade. According to CJI Dipak Misra, the total backlog of cases at all levels of the judiciary is a staggering 33 million! The impact of this delay should weigh a bit more heavily in the minds of the learned judges while they leave matters of administration in the hands of the executive branch of government. 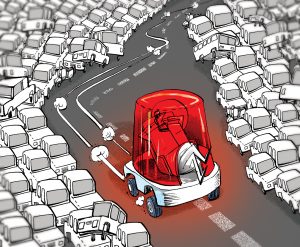 What is telling about the directive is the VIP mentality that has become part of the DNA of India’s ruling elite. Contrary to Abraham Lincoln’s famous definition of democracy, India has a government of VIPs, by VIPs and for VIPs. They do what they can, the people suffer what they must. In the heyday of European empires, colonial masters ruled imperiously over conquered subjects. During the Raj, the British class system fused seamlessly with India’s caste system to entrench social divisions even more rigidly.

After independence, India proudly declared itself a sovereign democratic republic and added the word ‘socialist’ in the Constitution. The central tenet of the four words taken together – sovereign, democratic, socialist, republic – is the sovereignty of the people. Politicians and officials are their servants. But as in other self-described socialist and communist paradises, India’s ruling elites captured all the privileges while the disempowered populace was saddled with poverty, scarcity and general misery.

The elite moved into the newly-vacated opulent bungalows of Lutyens’ New Delhi, even as the growing mass of destitute citizens lived in slums that sprang up along the city’s outskirts. Gradually political office became the fastest route to miraculous wealth acquisition and conspicuous consumption. In time the brazenness of privileged behaviour spread to an all-encompassing sense of entitlement as the political and bureaucratic elite, in that order, began to act like feudal overlords over citizens.

The more that the quality of public services (health, education, infrastructure) decayed and institutions were degraded and corrupted, the greater was the distance between the lifestyle of the closed circle of the elite and ordinary citizens. Inevitably this morphed into the VIP culture that Indians by and large detest with a depth of contempt, anger and resentment that is difficult for foreigners to fathom.

The Congress party bears particular responsibility for this sorry state of affairs as the party of government in New Delhi and most states after independence. One of the great attractions of Prime Minister Narendra Modi’s election winning slogan of good governance in 2014 was it promised to restore the rightful balance in relations between citizens, officials and politicians. ‘Twas not to be. In this as in most other respects, the gap between boastful rhetoric and actual practice remains distressingly wide: the 56-inch chest has been overshadowed by a 96-inch tongue.

Modi has tried to lead by example in some respects and is not in the least bit ostentatious himself. Nor has he given any indication so far of abusing his office for private gain or mistreating citizens. But this was the defence that his predecessor Manmohan Singh adopted without success: that the sea of corruption in which so many of his ministers were drowning was no indictment of his performance, for he himself was squeaky clean.

Similarly, although Modi himself has not been seduced by the VIP culture, he has failed to assert himself against those from within his and allied parties who have very publicly abused their offices. Perhaps he did learn the trick of bathing with a raincoat from Dr Saheb after all.

An obvious display of VIP culture that strikes foreign visitors is the list, in full public display at airports, of more than 30 categories of VIPs exempt from pre-boarding security screening. And how else other than a deeply instilled VIP culture do we explain Shiv Sena’s MP Ravindra Gaikwad’s air rage last year when he boasted he’d used his slippers to hit a 60-year old Air India staffer 25 times?

In a civilised country Gaikwad would have been expelled from the party, charged with assault and lost his seat. The party would have moved quickly to apologise to the attendant and the people and promised that such appallingly thuggish behaviour is neither condoned by nor acceptable to the party. But not in India’s corrupted political culture. Instead, Shiv Sena threatened to disrupt air travel. The Centre capitulated to this mobster-like blackmail and ordered Air India to take Gaikwad off the no-fly-list. Throughout the highly publicised episode, Modi’s silence was as eloquent as his predecessor’s on maha-scandals.

Compare this to a notorious incident in Pakistan – supposedly a less robust democracy – where on 15 September 2014, former interior minister Rehman Malik held up a plane for two hours. When he finally boarded, angry passengers harangued him and refused to let the plane take off until he had been thrown off. A passenger uploaded a video of the incident to YouTube. Two weeks later he was sacked from his unrelated job but not before his video was widely shared and praised by a public sick to death of Pakistan’s VIP culture.