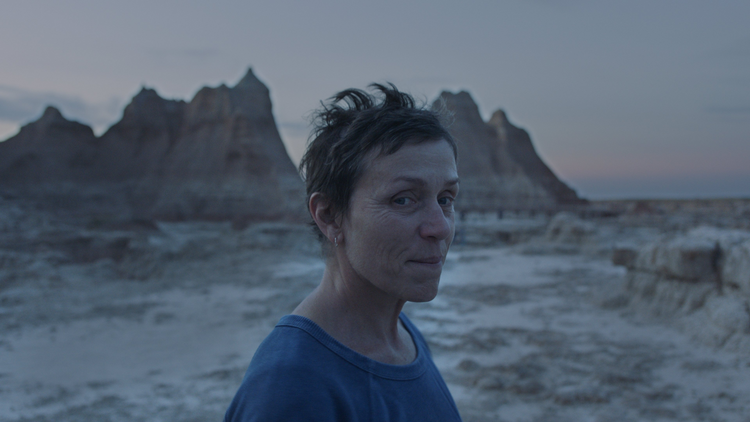 “Nomadland” is the kind of movie that wins awards and no one ever watches it again. It’s cruel but true. So is the film—which, of course, is the problem. Awards voters, even the Hollywood foreign press, which gives out the Golden Globes and named “Nomadland” their best film and Chloé Zhao their best director on Sunday night, could see that the film says too much about America to be ignored. With recognition duly paid, the impulse will be to hereafter ignore the message.

It is, admittedly, a tough watch. Largely a character study and a showcase for the actress Frances McDormand, it could not have been made anywhere but the United States. The vast expanses of the Western desert, the purple mountains’ chilly majesty, provide a stark, flat, unwelcoming setting for the story about retirees and other Americans living in their vans, migrating from seasonal jobs to swap meets, from national parks to potato harvests, orbiting the interior of their country, unhoused and inadequately supported. They might as well be on the moon for all the good America is to them.

Fern, McDormand’s character, is the classic disillusioned American—a distillation, perhaps, of the Trump voter profile. And Fern’s story is based on fact: Her real-life counterpart and her husband worked for years for U.S. Gypsum in the company town of Empire, Nev.; it was shut down in 2011, and its population was evicted within a year. (The film takes place not long afterward.) Fern’s husband has died and left her little; she has lost her home and town, and so she has converted her van—named “Vanguard”—into a combination motor vehicle and efficiency apartment.

It has often been said, and been proven true, that America can be seen freshly only through foreign eyes. Much has been made of the fact that Zhao is Chinese-born; but she was educated here, lives here and her films (“The Rider,” most prominently) have been made here too. It is pure conjecture, of course, but the fact that Zhao will forever be “Chinese” in the eyes of many Americans probably contributed to the delicate way she interprets Fern’s own imposed alienation from the country she thought she lived in.

Commentary: For multi-stakeholder capitalism, the future is now

SPACE SWEEPERS captures the hell of being trans under capitalism