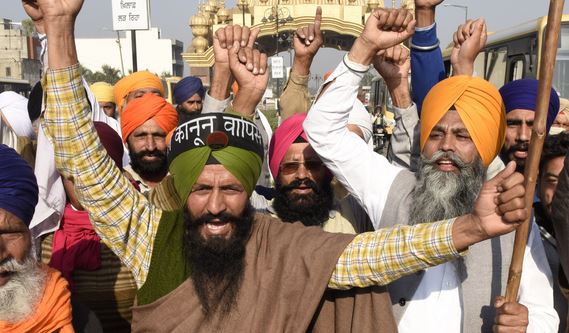 In India, agricultural workers have been protesting for months against government plans to reform the farming industry. Caravans of protesters have descended on Delhi, establishing tent cities around the capital, where a heavily policed border has been erected to keep protesters at bay.

Prime Minister Narendra Modi’s government claims the reforms will promote international trade and encourage price rises, while protesters fear deregulation will be devastating for the livelihoods of workers and small landowners.

In this episode of World Review, Emily Tamkin in Washington, DC and Ido Vock in Berlin are joined from Copenhagen by historian and academic Ravinder Kaur. Her latest book, Brand New Nation, explores the relationship between capitalism and nationalism in India, and the efforts of the Modi government to make the subcontinent an international investment destination.

Ravinder joins the podcast to discuss the impact these protests may have on the Indian government’s efforts to accelerate its deregulation of the economy.

Read Ravinder Kaur’s article for the New Statesman, exploring how the farmers’ protest in India evolved into a mass movement that refuses to fade.

Emily wrote in February about how the protests went global on social media thanks to a tweet from the singer Rihanna.

Elsewhere, Ido asks why the international community appears to be standing by while mass famine threatens millions of lives in Yemen.

The Roman Road to Capitalism and the Rise of the West