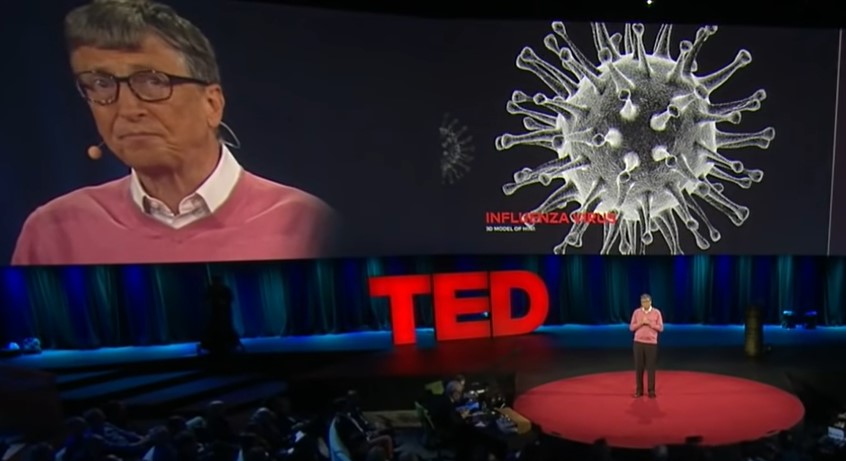 As the coronavirus spreads with a dangerous and relentless momentum, many Americans, including political leaders, have been shocked over how the pandemic has shut down the world economy, stretched hospitals to the breaking point, and transformed everyday living.

But Bill Gates warned five years ago that it was coming. In a TED talk in 2015, the Microsoft co-founder and billionaire philanthropist cited lessons learned from Western Africa’s 2014 Ebola virus crisis, and said the U.S. and other countries were not prepared for the future pandemic that was going to hit them.

“If anything kills over 10 million people in the next few decades, it’s most likely to be a highly infectious virus rather than a war,” Gates said. “Not missiles, but microbes.”

Gates noted that many countries worked for years to reduce the risk of nuclear war, and needed to give similar attention to a massive mobilization against a killer virus.

“We’ve actually invested very little in a system to stop an epidemic,” he said, echoing warnings in recent years from infectious disease doctors. “We’re not ready for the next epidemic.”

Gates praised the “heroic work” by health care workers who went to Africa to help with the Ebola response. But in his March 2015 talk, he noted that there were not enough epidemiologists tracking the disease or sufficient doctors to treat patients, records were kept on paper instead of computers, and other major shortcomings hampered efforts. Society was lucky that outbreak — which killed more than 11,000 people in Liberia, Sierra Leone, and Guinea — mostly stayed in rural areas, he said, or it would have been much worse.

“The failure to prepare could allow the next epidemic to be dramatically more devastating than Ebola,” he said.  A virus “like the Spanish flu of 1918,”  Gates added, “would spread throughout the world very, very quickly. And you can see over 30 million people died from that epidemic. So this is a serious problem. We should be concerned.”

Individual countries, the World Health Organization, and others need to create medical strike teams that train like military soldiers, run simulated pandemic exercises, and prepare to quickly move into areas where pandemics are starting to test and treat victims, he said. Governments also need to invest far more in medical equipment, vaccine research and other ways to prepare.

“Now I don’t have an exact budget for what this would cost, but I’m quite sure it’s very modest compared to the potential harm,” Gates said. “The World Bank estimates that if we have a worldwide flu epidemic, global wealth will go down by over three trillion dollars and we’d have millions and millions of deaths.”

“There’s no need to panic,” Gates said in closing. “We don’t have to hoard cans of spaghetti or go down into the basement. But we need to get going, because time is not on our side.”

Although he began his career as a computer programmer, Gates, 64, has devoted much of the last 20 years to public health and medicine.

The Bill & Melinda Gates Foundation, based in Seattle, is run by three trustees: Bill and his wife Melinda Gates, and financier Warren Buffett. Since it was established 20 years ago, the foundation has contributed more than $6 billion to medical research and health care, focusing on treatment and prevention of AIDS, tuberculosis, malaria, measles and other diseases, particularly in Africa and some of the poorest parts of the world.

On Feb. 5, the foundation announced a $100 million donation to fund research and development of drugs and other treatments for COVID-19.

Last Wednesday, in an online “ask me anything” chat on the discussion forum Reddit, Gates was asked how long the current crisis would last.

“If a country does a good job with testing and ‘shut down,’ then within 6-10 weeks they should see very few cases and be able to open back up,” he responded.

He said people should remain calm. And leaders must invest more in preventing future pandemics, he stressed.

“We need to have the ability to scale up diagnostics, drugs and vaccines very rapidly,” Gates wrote. “The technologies exist to do this well if the right investments are made. Countries can work together on this.”

In another video conference Tuesday, Gates reiterated the 6-to-10 week prediction and acknowledged it will cause widespread economic pain. But he said it is critical that social distancing rules be kept in place so that cases don’t spread out of control, hospitals become overwhelmed and deaths soar.

“It’s very tough to say to people, ‘Hey keep going to restaurants, go buy new houses, ignore that pile of bodies over in the corner, we want you to keep spending because there’s some politician that thinks GDP growth is what counts,”” Gates said. “It’s hard to tell people during an epidemic … that they should go about things knowing their activity is spreading this disease.”

500 German Doctors And Scientists Question Official Covid-19 Story: ‘It Is High Time That We Took This Into Our Own Hands’

Bill Gates predicted a pandemic in 2018. Now that COVID-19’s arrived, here’s how he wants to control it.