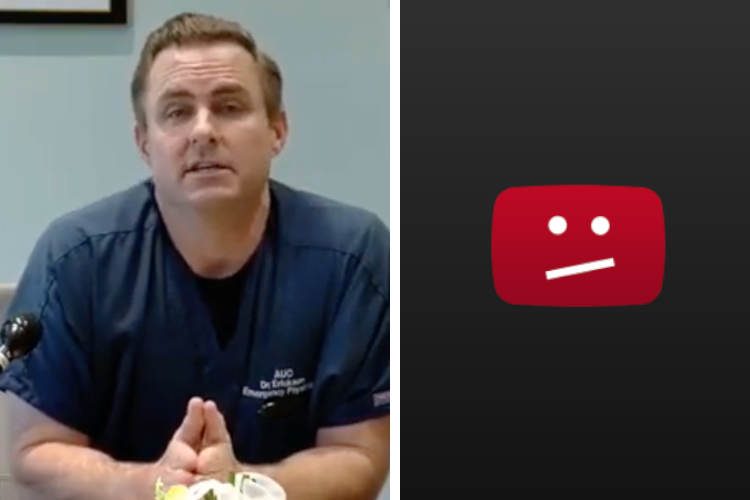 The video received over 5 million views before it was removed for “violating YouTube’s terms of service.” Only weeks ago, YouTube CEO Susan Wojcicki told CNN that the company would ban all content which contradicts the position of the World Health Organization (WHO), even after several of their previous pandemic models turned out to be false.

Dr. Dan Erickson and Dr. Artin Massihi, the doctors featured in the press briefing, affirmed that based on the most recent data, “[patients] have a 0.03% chance of dying from Covid in the state of California.”

Doctors around the country are also being urged to regard any death of a patient who has tested positive for the virus to be added to the number of confirmed coronavirus cases, regardless of whether that patient had other health issues, the doctors say.

In an interview with Fox News, the doctors discuss the reality that Sweden is just weeks away from herd immunity without a vaccine because of the fact that they did not lock down their country, and there is little difference in Covid-19 deaths per capita compared to the United States.

Through analyzing this data, the doctors present the question of whether there is any evidence at this point that the lockdowns are making us safer, or if governments are actually causing harm by keeping us from engaging in regular contact and business.

As millions of people around the world are suddenly jobless and unable to leave their homes, social isolation has put many of us in a situation where we are with an abusive spouse or parent, or where social distancing has resulted in a return to drug abuse or even suicide caused by a lapse in mental health.

“Child molestation is increasing at a severe rate… Spousal abuse, alcoholism, anxiety, depression, suicide… Suicide is spiking, education has dropped off, economic collapse… These are things that will follow these people and affect them in a negative fashion for their life…” – Dr. Erickson