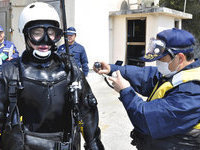 When the rulers do not value the human lives, except the of the rich, they are just the most dangerous beasts.

Indian regime, run by mafias of all sorts, including nuclear mafia, always showcases the common masses its resoluteness and arrogance. Pushing through in hurry the Kudankulam nuclear terror plant in Tamil Nadu caring a damn for the people living there who protest against the commissioning of the terror machines in their locality.

Sonia-Manmohan-Rahul trio killed the fisher men right on the sea in Kudankulam in order to get the way cleared for the plant.

India has terrorized the people of Kudankulam. But people continue to struggle to get the terror plant shut down.

Arrogant Indian regime refuses to learn from Japanese nuclear terror experience. Around 100 tonnes of highly radioactive water have leaked from a storage tank at Japan’s Fukushima nuclear plant so as to silence the people- the voters.

The nuke plant, which was damaged by an earthquake and tsunami in 2011, has faced multiple problems including leaks and power cuts since the disaster. Operator Tokyo Electric (Tepco) says the toxic water may have overflowed after a valve was left open by mistake on 19th February.The water was unlikely to have reached the ocean. Tepco says the radioactive water overflowed from a storage tank, but the leak was not discovered for several hours The water from the leak was radioactive, with a reading of 230 million becquerels per litre of radioactive isotopes.

On 11 March 2011, an earthquake and tsunami crippled the plant. Waves knocked out cooling systems for the reactors, leading to meltdowns at three of them. Water is being pumped in to cool the reactors. However, this creates large amounts of contaminated water that must be stored securely.

The Fukushima nuclear power plant suffered a number of setbacks last year, including worker errors and a series of toxic water leaks that have lead to concerns contaminated water is mixing with groundwater that is flowing into the sea. A becquerel is a unit used to measure radioactivity.

WHO advises advises against drinking water with radioactivity levels higher than 10 becquerels per litre.

The operator says the leak occurred when contaminated water was accidentally pumped into a large storage tank that was already full. “We apologize for worrying the public with such a leak,” Ono said. “Water is unlikely to have reached the ocean as there is no drainage in that tank area. We are now in the process of recovering the leaked water and the earth it has contaminated,” he added.

The latest leak is the most serious since August, when the plant leaked 300 tonnes of water, prompting Japan’s nuclear agency to raise the incident’s alert level.

Tokyo Electric Power (Tepco) had delayed making a final announcement on the fate of reactors number 5 and 6 at Fukushima while negotiations continued about the financing of the decommissioning process. The executive board has now accepted the inevitable and acknowledged there will be no attempt to generate electricity from the plant again.

The announcement came as Japan posted a big jump in its trade deficit for November – to $12bn – the result of a huge increase in energy imports. Nearly three years after the disaster, Japan is free from any dangerous nuclear power.It used to supply about 15% of the country’s energy needs but now alternative sources are helping Japan. .

The operators of the crippled Fukushima nuclear power plant in Japan are to decommission two reactors that were not badly damaged by the earthquake and tsunami in 2011. They have bowed to public pressure that the plant be shut permanently. Four reactors were severely damaged by the disaster that struck in March 2011.

Workers are still struggling to stem leaks of contaminated water, and have begun to remove fuel rods from a storage pond at a reactor building.

The public remains divided over the future of nuclear power, but the increasing trade deficit helps increase the pressure to turn nuclear power stations back on.Experts estimate that it could take three or four decades to clean up the site at Fukushima and decommission all the reactors.

India while trying for better trade ties with Japan in recent years, however, refuses to learn from its horrid nuclear experience and wants to add more and more terror plants in Kudankulam

It is easy to say Indian planners are funny or dangerous guys. But will it help the people of Kudankulam trebling with fears of radioactivity, reactor blasts, apart form possible nuke attack from abroad any time!