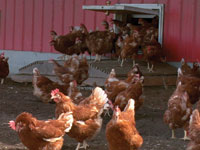 (NC) — British Columbia’s dairy and poultry sectors have long provided a much-needed source of stability in the province’s turbulent farm sector. This role has expanded to a point where they now account for nearly half of all agriculture employment, according to a report released by PricewaterhouseCoopers.

The PwC report, “Economic Impact of British Columbia’s dairy, chicken, turkey, hatching egg and table eggs industries – 2011 update,” credits the system of supply management that oversees these sectors. By working with industry and government to set production levels, the system ensures the fair and predictable returns farmers need to make the investments that are expanding payrolls

In contrast, the rest of B.C.’s agriculture sector shed 9,400 jobs between 2007 and 2011, a 27 per cent drop. As a result, PwC estimates that 45 per cent of all agriculture jobs are now in sectors that are supply managed, up from 25 per cent four years earlier. These sectors, made up of 1,100 family farms, added $1.6 billion to the provincial GDP and supporting $5.6 billion in economic activity.

“The lesson is clear,’ says Dave Eto, on behalf of BC’s Dairy, Egg and Poultry Industries (BCDEPI). “Farming is a highly volatile business. Supply management eliminates the boom-bust cycles and allows us to focus on producing high-quality food that is produced on local family-owned farms.”

Critics of supply management argue that the dairy and poultry sectors ought to be opened up to foreign competition. That would mean competing head to head with U.S. where farms, which are much bigger, to take advantage of economies of scale, and receive billions of dollars in government subsidies.

In the U.S. dairy sector, for example, government subsidies account for 40 per cent of total farm revenues while Canadian dairy farmers do not receive a penny in government support.

Size is also a big difference, and small means local.

Conversely, the U.S. egg sector is dominated by massive operations. Fifty-seven egg producers have flocks bigger than 1 million hens and account for 87 per cent of the country’s entire output. Within that group, 16 companies have more than 5 million layers.

B.C. has a total of 2.5 million hens, so a single U.S. factory farm could supply all of the province’s eggs and still have enough left over to meet the entire demand of Alberta and Saskatchewan.

The situation is similar with dairy and poultry producers.

“When you do the math, you quickly see that opening up B.C. to massive and highly subsidized American producers threatens our entire existence,” explains BCDEPI’s Eto. “Not only does this threaten thousands of jobs, consumers will no longer enjoy food produced on local farms. Their staple foods may be coming from as far away as Ohio or Pennsylvania.”