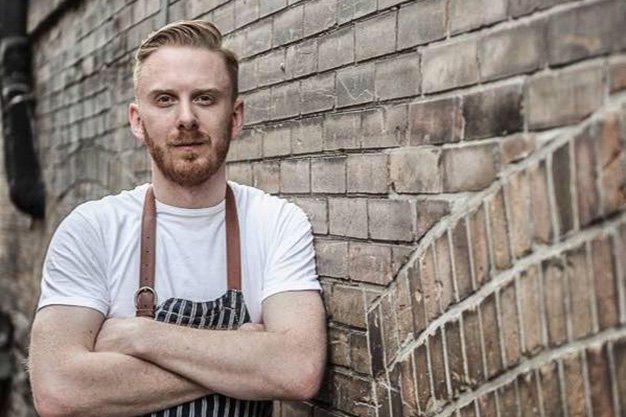 The menu promises an explosion of flavours, beginning the night with some Kentucky Derby favourites such as the duck confit Hot Brown (an open-faced sandwich), and end up in the French Quarter with shrimp and grits (Mardi Gras beads optional).

U-Feast is upping the ante on the booze, no less. Jim Beam’s Canadian whisky ambassadorMatt Jones will walk attendees through the wonderful and trendy world of bourbon, and pair the evening’s dishes with evolved libations.

I had an opportunity to chat with Chef Brent Maxwell to find out more about his food philosophy and his take on southern eats:

Where did you grow up? What is your culinary background?

I grew up in small town Ontario, a place called Hillsburgh. I lived there until I was 20 and moved to Toronto to experience the culinary scene. I went to Humber College for my culinary training in 1998.

You’ve worked in numerous kitchens, but most notable are your stints with O&B here in Toronto and Maison Pic, a tri-Michelin-starred bistro in southeastern France. ​How have these experiences influenced the way you cook and craft menus?​

O&B offers different experiences and styles in each restaurant. This has given me breadth and depth in cooking styles and flavours. And going to France for Maison Pic was an eye-opener in terms of learning about the art and intricacies of fine dining.

How would you define or describe your personal food and cooking philosophy?

I would define it as smart cooking, as in things and flavours that work together naturally, harmoniously. It is definitely French-based and branches out from there.

Can you tell me your experience with cooking southern food in preparation for the U-feast menu?

Well, it all ties in with French basics and its cooking foundations. It is all essentially grounded in French cuisine. The exception is that with southern food, it uses more flavours to accent everything – spice and smoke, for instance. The menu we made for this event is on the heavier style. We focused on richer flavours and offering plates in a family-style manner.

Tell me about the menu’s inception.

It works through the bourbons/whiskies. In fact, we’ll be using bourbons directly in the dishes, in addition to the food complementing the drinks. Matt Jones will also be offering a flight of whiskies and interesting cocktails to pair with the evening’s menu.

In addition to including B.C.-sourced shrimp, how have you integrated your passion for sustainability and Oceanwise/Seafood Watch-approved items into this menu?

The idea from the outset was to do southern-style dishes but with a focus on local, Canadian ingredients. We wanted to highlight B.C. shrimp because we have a great relationship withOrganic Ocean – so we wanted to incorporate them into menu.

And a Hot Brown sandwich traditionally uses turkey. But we’re elevating the dish by featuring King Cole duck legs from Ontario in our version. We want to show how delicious our homegrown food is.

We just returned from Australia. So it would probably be a restaurant there. In fact, we had pretty crazy tasting menus. The one that stuck out was from Quay. The standard of food there was stellar, and not just with the fine dining places – even in the casual cafes, like eggs and toast – everything was done super well. There’s attention to detail.

Definitely Alo and Dandylion. [Chef] Patrick [Kris] and I worked briefly together. He was on his way out of Luma and I on my way in.

If you could cook with anyone, dead or alive, who would it be? What would you cook?

I’ve phased out those old cravings for fast food. I used to get a Baconator once a year, but I don’t even do that anymore. I’ve been pretty good with eating clean now.

Find out more about U-Feast here.