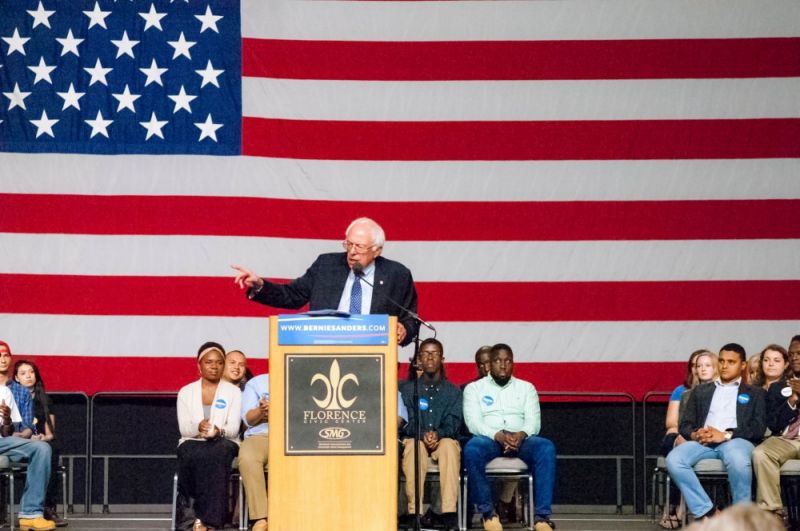 Four out of 10 people who went to participate in the Iowa Democratic Caucus told pollsters at the door that they identified themselves as socialists. It was perhaps this segment that gave Bernie Sanders, running for the Democratic Party nomination for President, a boost. The final result from Iowa was virtually a tie between Sanders and Hillary Clinton, who represents the more established wing of the party. Socialism is not typically associated with the United States. In fact, the U.S. is seen generally as antithetical to socialism.

None of this seems to matter to those who support Sanders. When he announced his candidacy for the presidency, few reporters came for the announcement. They expected him to be the protest candidate with little momentum beyond the fringes of the country. What happened next was not predicted. Sanders travelled around the country, filling massive halls and drawing in ecstatic audiences. He raised money outside the channels of Wall Street, largely from small donors (average contribution $27). Millions of people are enthused by Sanders, and millions of dollars came into his campaign coffers. The tag line for this passion is “Feel the Bern”, meaning experience the jouissance of the Sanders wave.

Sanders calls himself a socialist. He began his political career in the early 1960s at the University of Chicago in the Young People’s Socialist League and the Socialist Party of America. When he moved to Vermont, Sanders ran for political office in that State’s socialist front, the Liberty Union Party. His roots in the American socialist movement are clear. So is his commitment to the idea itself. Early in his career, Sanders avoided the term “socialism”.

In 1976, he told The Vermont Cynic: “I myself don’t use the word socialism because people have been brainwashed into thinking socialism automatically means slave-labour camps, dictatorship and lack of freedom of speech.” Forty years later, and with the Soviet Union gone for the past 30, Sanders is less chary. “Do they think I’m afraid of the word?” he said to The Nation magazine. “I’m not afraid of the word.”

The legacy of Occupy

Sanders’ rallies are vibrant and enthusiastic. The message of income inequality draws people who have been frustrated with the decline in basic social conditions. Wages have remained stagnant for decades; jobs have been hard to find. The rich have gone on strike, refusing to pay taxes and insisting on balanced budget amendments that drain government revenues. This has meant that social welfare programmes have deteriorated and basic infrastructure has not been maintained. Everyone sees this reality, which is rarely talked about in clear terms.

What the Democratic Party generally addresses is the surface deterioration—President Barack Obama, for example, often speaks of the decline in infrastructure and the need for more robust anti-poverty measures. But few link this to the tax strike by the rich and the growth of income inequality. Sanders borrows the vocabulary of the Occupy Movement, pointing fingers at the 1 per cent and its domination of the economy and polity through a corrupt campaign finance system and tax code.

Not all of Sanders’ politics is driven by moral outrage at inequality. There is also political intelligence at work here. A large section of the youth in the U.S. has been disenchanted with politics. Obama’s election drew in large numbers of young people who believed in his message and his persona. They wanted Obama to go to the White House and fix what they saw as a country broken by the long reign of George W. Bush and his regime. Sanders is drawing some of that energy but not in the same way. Few people at Sanders’ rallies believe that he can fix things. They feel as if they are part of a movement, drawn to Sanders for his adoption of ideas that appeal to their anxieties. Some worry that since the movement is being built within the Democratic Party, it will not have any independent character when the election campaign ends.

The main plank of Sanders’ campaign that appeals to young college students, a key constituency, is his attack on student debt (now at over $1 trillion) and his fight for free higher education. These young people like the idea that the rich should pay more tax so that they can go to school. They are not rich, so the tax will not affect them. But they are students, so they would benefit from such a campaign. It is this combination of idealism, the chance to be part of a movement for change and the hope for pragmatic improvement in their lives that brings young people, in this case, to Sanders.

One part of the American progressive movement is concerned with matters of wealth and income inequality. This is the way people talk about “class”, a word that is rarely used in American political conversations.

But the other part of the progressive movement has to do with social concerns, such as racism and misogyny. Vermont, where Sanders is the Senator, is a mostly white state. Sanders does not have sufficient exposure to the pressing social problems of this time, namely police brutality and violence against women. These have not been his arenas of interest. It is here that Hillary Clinton, being the first woman with a real chance of winning the presidency, comes in. It is not merely that she would break that glass ceiling that draws her support; it is that she is genuinely more linked to some of these fights (for instance, the defence of a woman’s right to control her reproductive health). Sanders is not opposed to any of this; it is merely that he is more at home talking about Wall Street than about “Black Lives Matter”, women’s rights or Islamophobia.

American socialists are not new to the electoral process in the U.S. In 1895, Eugene V. Debs read The Communist Manifesto in prison, after being sentenced for his leadership of the American Railroad Union. Leaving jail, Debs gravitated to the Socialist Party, which he led as its presidential candidate five times. In 1912, Debs won a million votes, about 6 per cent of the ballot. He was in prison again when he ran for president in 1920. “There are no bars and no walls for the man who in his heart is free,” he wrote. His followers wore buttons that read, “Vote for Prisoner 9653”. He once again won almost a million votes.

The next standard bearer of American socialism was Norman Thomas, a journalist who took the Socialist Party to near a million votes in 1932. As with the Sanders’ campaign, young people dominated his rallies and took refuge in his campaign. The Wall Street Crash of 1929 hung over the country. Thomas had an antidote to the extremism of the rich. These were heady times for the Left. The American Communist Party leader William Z. Foster wrote a book in 1932 called Toward Soviet America. The Communist Party itself would grow to about a hundred thousand members in that decade.

What sidelined Thomas was the Democratic Party, whose leader Franklin D. Roosevelt seized key parts of the socialist agenda but emptied out its radical content. Harsh state repression of communists in the Cold War years frightened the tradition into submission. Socialists pinned their hopes on influencing the Democratic Party, which had absorbed much of the support of the trade union movement.

The socialist Michael Harrington, author of The Other America (1962), offered his anti-poverty assessment for the use of the liberal wing of the Democratic Party. They did not see any hope in building an independent Left in the U.S. What remained of the Left had a sectarian flavour. It did not seem capable of building a mass presence. Sanders comes squarely out of Michael Harrington’s tradition, which is why he is not uncomfortable running for the presidency on the Democratic Party ticket.

Whatever the outcome of this race, Sanders has certainly brought the idea of “socialism” back on to the table in American homes. His is a Scandinavian form of socialism. In 2006, Sanders told Amy Goodman of Democracy Now! about how in Scandinavia, “poverty has almost been eliminated. All people have health care as a right of citizenship. College education is available to all people, regardless of income, virtually free.” This is his vision. It is a far sight more humane than what passes for liberalism in the U.S. It is what appeals to the common sense of people who have found their own wealth disappear and their incomes deteriorate, who see children flounder with debt and their credit cards provide the means to maintain their standard of living.

The “Feel the Bern” movement speaks to those anxieties. Whether this is socialism or not is beside the point. It has rejuvenated a politics that had fallen into acute depression, one that allowed the Far Right—Donald Trump, Ted Cruz and Marco Rubio—to tear into the social fabric with hatred of minorities and women as the solution to the crisis. What Sanders has done is to speak directly about the woes of people and offer an alternative that is not hatred. In a way, that is part of the socialist inheritance.